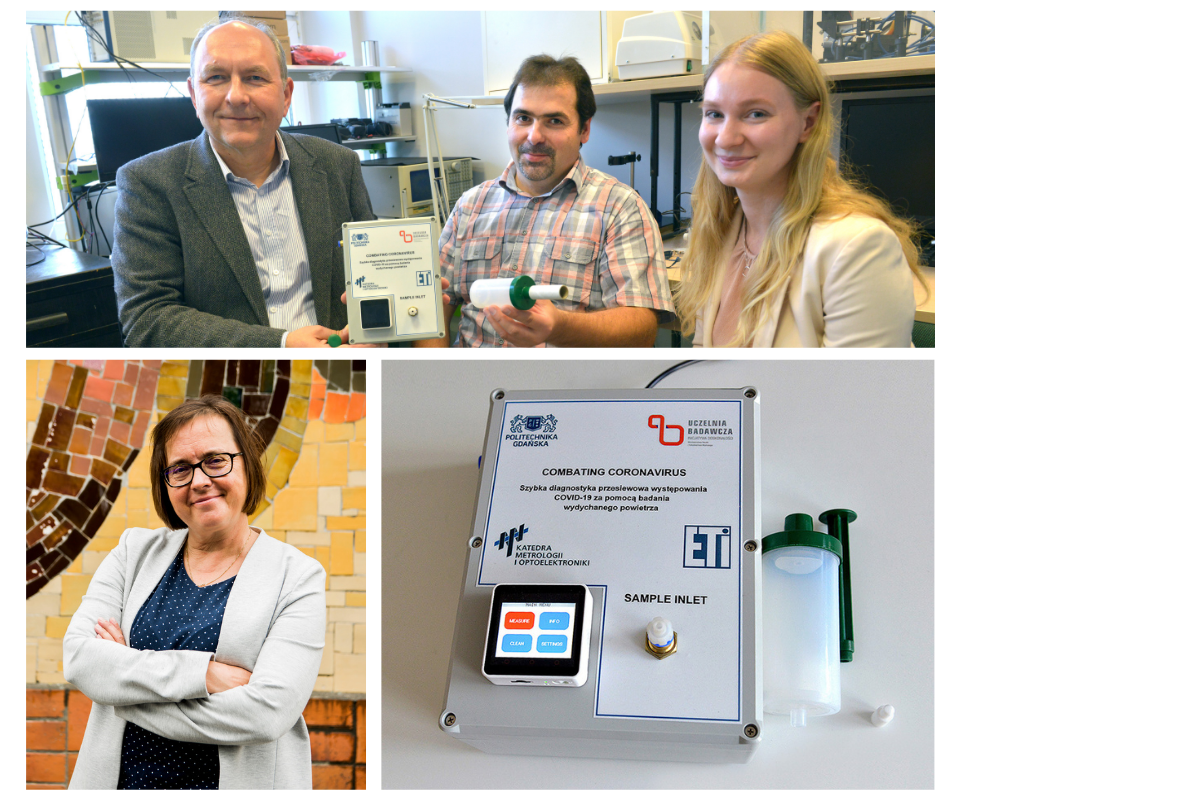 Scientists from the Gdańsk University of Technology have developed a portable device to analyse samples of exhaled air for SARS-CoV-2 infection, which will ultimately enable obtaining the test result even within a minute, for a symbolic “penny” and in a less cumbersome way for the person tested than by means of the methods now in use. The invention, which has been acknowledged by the American media that popularise scientific achievements, is being tested by the doctors of the Medical University of Gdańsk who work at the University Centre for Maritime and Tropical Medicine in Gdynia.

– Our method is not as accurate as the tests currently in use, but it is faster, much cheaper and more pleasant for the patient than the need to take a sample from the nasopharynx. Therefore, the method will come in useful as a screening method, i.e. one that permits the initial detection of the infection and the recommendation of a thorough examination – emphasizes Prof. Janusz Smulko, Head of the Department of Metrology and Optoelectronics at the Faculty of Electronics, Telecommunications and Informatics of the Gdańsk Tech. - We do not detect the RNA of the virus but the effects of its activity in the form of the mixture of volatile organic compounds (VOC) released from the lungs, such compounds being produced as a result of disturbed metabolism caused by the infection. Systems of that kind may be helpful, especially as the pandemic continues to develop, when COVID-19 is predicted to be a seasonal disease, and early detection will permit the use of suitable medication preventing the progress of the disease and the development of dangerous complications.

Results as quickly as within a minute

The device is easy to use and the test procedure is limited to pressing a few buttons.

– In the device version which has been developed, the patient blows into a container (the “BioVOCTM breath sampler”) which has a disposable mouthpiece and resembles a large syringe of a special component used in the breath testing technique. The most important is the final phase of the breath, where the highest VOC concentration occurs. Then the device sucks the contents of the syringe into a small chamber with sensors, and the analysis begins – explains Andrzej Kwiatkowski, Ph.D. Eng., of the Department of Metrology and Optoelectronics.

Currently, the test result is obtained within approximately 10 minutes.

– However, this is excessive time. During the research on the device, we wanted all the measuring sensors to have more time reserve than required for the working conditions to stabilize. We estimate that this time could be shorter, around one minute – emphasizes Andrzej Kwiatkowski, Ph.D. Eng.

Between measurements, the device is self-cleaned to remove the residues of previous samples. The device is powered from the grid, but it can also be powered e.g. from a car or a battery, and use wireless data transmission. 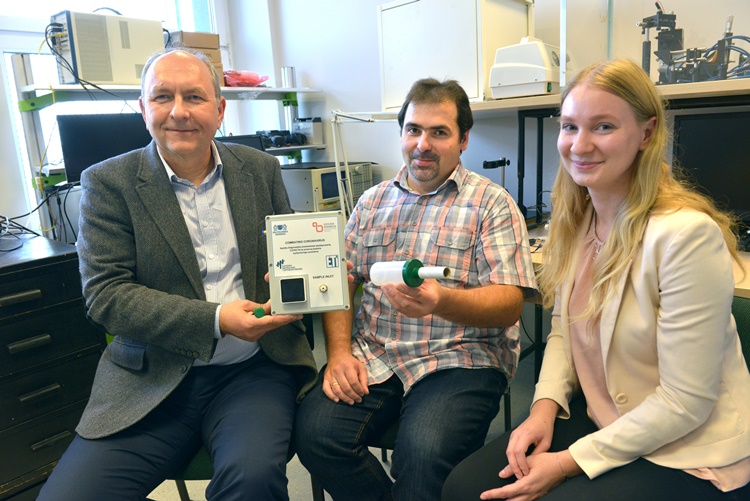 Relying on available and energy-efficient sensors

The researchers relied on small sensors, both on commercially available ones and prototypes, developed during other research projects pursued at the same time.

– Our idea was to develop sensors which may not be very selective, but are widely available and also less energy-consuming, so that the devices can be installed in many places, also in countries where it is not possible to conduct extensive COVID-19 diagnostics due to the cost – says Prof. Janusz Smulko.

The device uses the solutions developed in the EU research project TROPSENSE, implemented a few years ago at the Gdańsk Tech, and concerning the exhaled air-based diagnostics of tropical diseases (dengue, leishmaniasis and echinococcosis).

Within the project titled the Rapid Screening Diagnostics of the SARS Cov-2 Infection using Exhaled Air Test, financed by the Gdańsk University of Technology from the Combating Coronavirus program, Gdańsk Tech scientists cooperate with Katarzyna Sikorska, M.D., Ph.D., Associate Professor at the MUG, and doctor Sebastian Borys of the Department of Tropical and Parasitic Diseases at the University Centre for Maritime and Tropical Medicine in Gdynia, the teaching hospital of the Medical University of Gdańsk (since the beginning of the SARS-CoV-2 pandemic, the University Centre for Maritime and Tropical Medicine has been a key Pomeranian centre for the fight against the pandemic and the first hospital fully prepared to provide professional care for coronavirus infected patients). 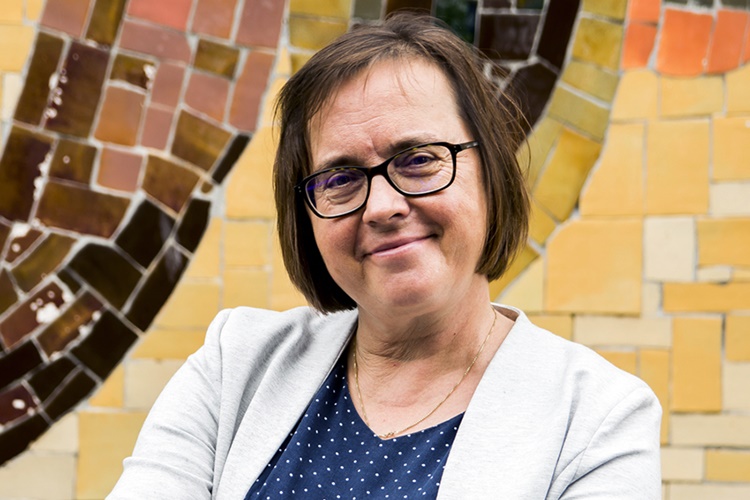 As it is emphasised by Prof. Katarzyna Sikorska, Head of the Department, the method based on quick breath analysis avoids the patient’s unpleasant experience related to the correct taking of a nasopharyngeal swab for a PCR or antigen test and permits an express result.

– Some of the technologies being developed permit direct virus detection. Others, by detecting changes in the composition of the air exhaled by an infected person, may serve as an initial, quick, easy-to-perform screening test for segregating the tested persons – explains Prof. Katarzyna Sikorska. – Such a method may prove particularly useful where it is important to test a large number of people in a short time, e.g., in testing passengers at airports, guests at restaurants, attendees of mass cultural events, employees of large industrial plants, as well as students at educational institutions. A similar device has already been approved on a preliminary basis for use among travellers in Singapore and used in the Netherlands to test port workers.

As the Gdańsk Tech scientists emphasize, the method being tested may prove an interesting alternative to the routine diagnostic methods currently used, and the test, which is easy to conduct in various conditions, fits into the perspective of developing tools for an ideal model of SARS-CoV-2 infection testing: fast, mass and low-cost.

– The device is located in the hospital and the measurements are made there. We are working on the final analyses of the results, which we will present in a publication, and on further modifications of the device – says Andrzej Kwiatkowski, Ph.D.

The details of the device, jointly developed by Prof. Janusz Smulko and Andrzej Kwiatkowski, Ph.D. Eng., and also by Katarzyna Drozdowska, M.Sc., are described in the article titled Embedded gas sensing setup for air samples analysis.

The invention designed at the Gdańsk Tech has been acknowledged by the American media which popularise scientific achievements. An article about this topic was published at eurekalert.org.

Joint research infrastructure of three universities, which will facilitate the conduct of projects and research.

Summary of the "Hunting of Huntington's disease” meeting