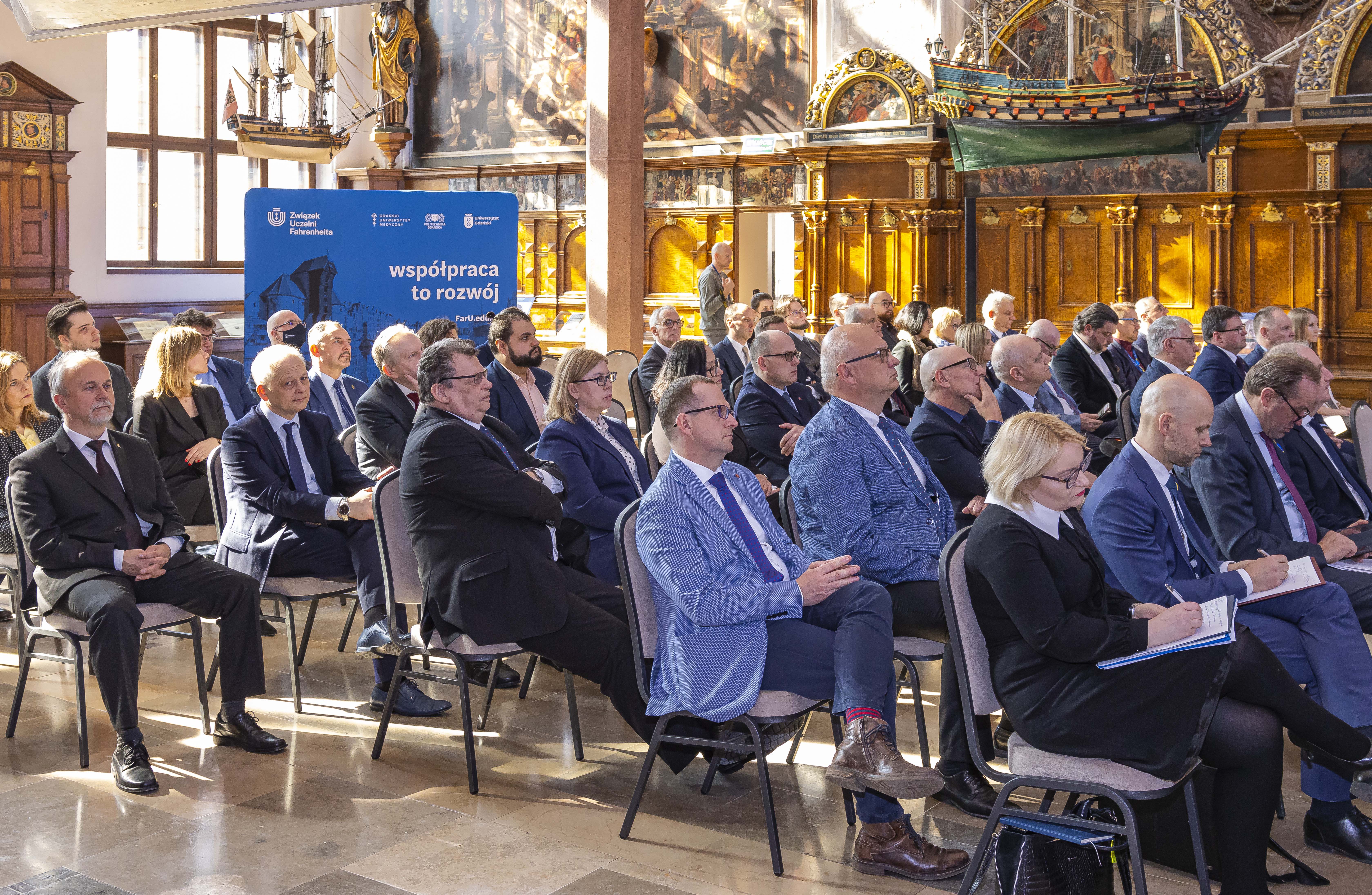 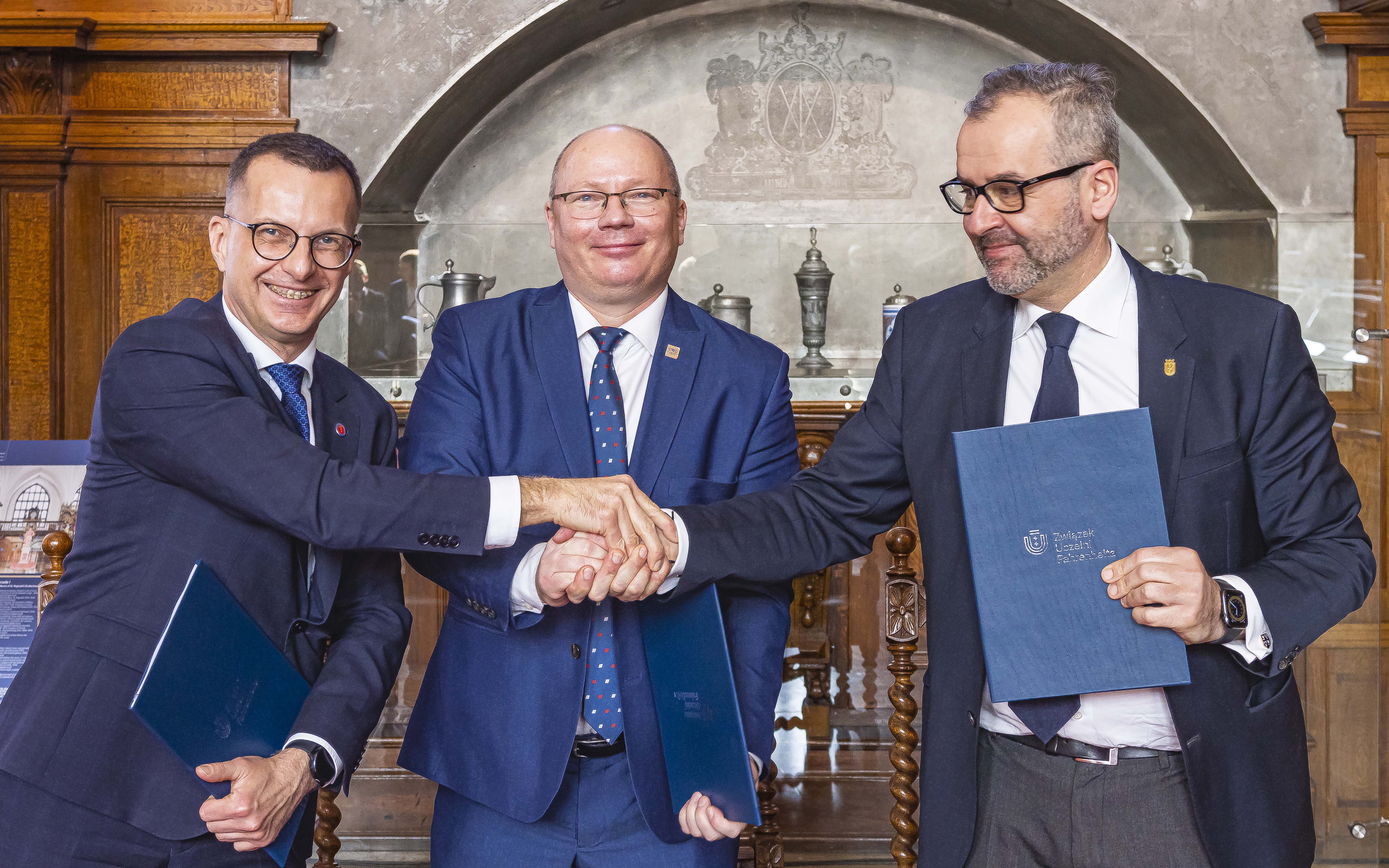 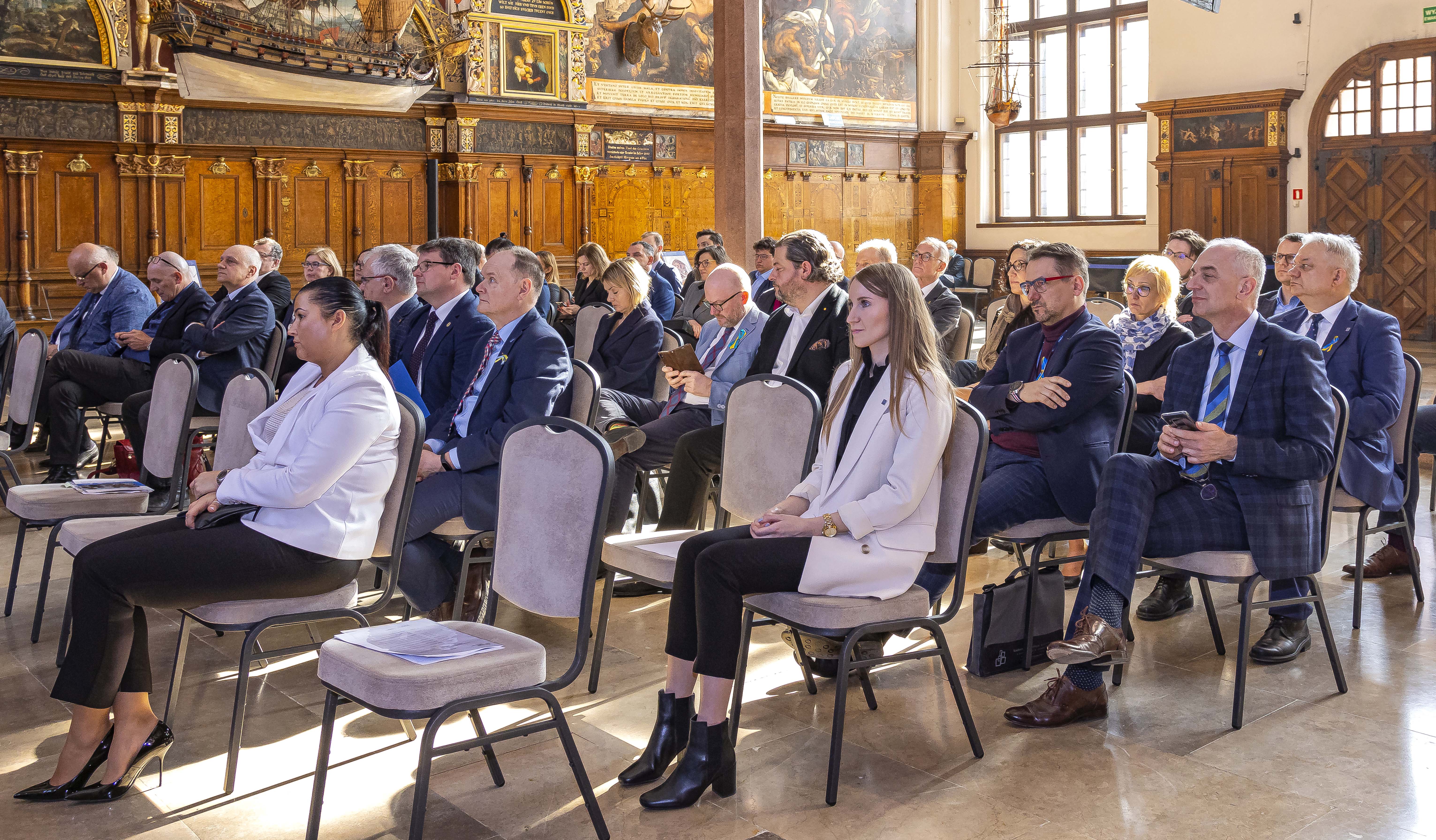 Implementing the mission of cooperation for the development of scientific potential and strengthening the position of Gdańsk as a strong, international academic centre in the field of scientific research and modern education, the founding members of the Fahrenheit Union of Universities in Gdańsk signed an agreement to create the "Fahrenheit Universities" community and on cooperation in the creation of the "Fahrenheit Universities" federation. The ceremony took place on 17 March this year at the Artus Court in Gdańsk. 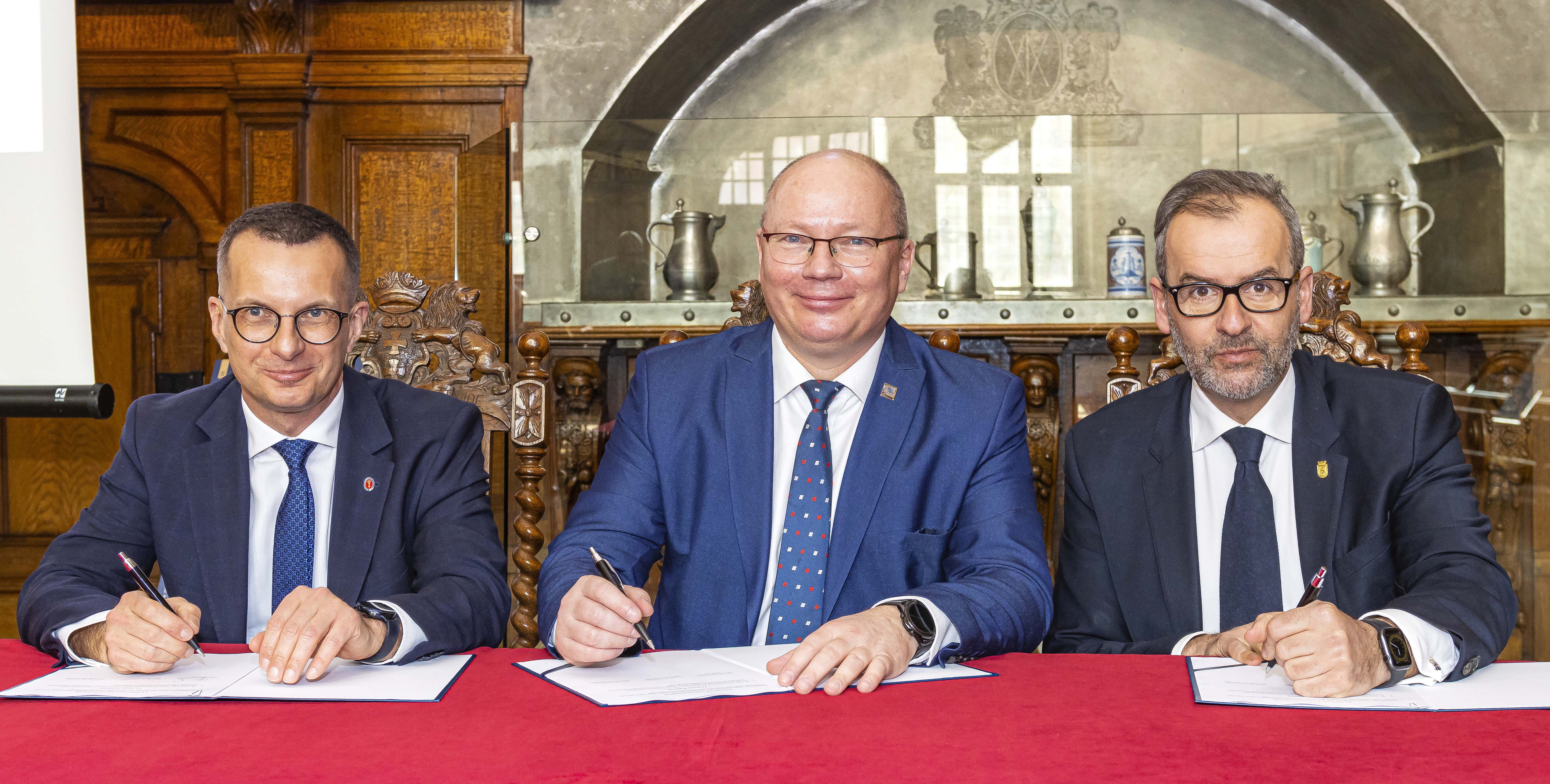 The event was attended by the rectors: Prof. Marcin Gruchała (MUG), Prof. Krzysztof Wilde (Gdańsk Tech) and Prof. Piotr Stepnowski (UG). Among the other participants were also the FarU Director, Prof. Adriana Zaleska-Medynska with her deputy – Katarzyna Zygmunt, who hosted the ceremony, as well as representatives of local government authorities, who had fully supported the joint activities of the three largest universities in Pomerania from the very beginning. The academic communities of the MUG, Gdańsk Tech and UG were accompanied by: Dariusz Drelich, Head of the Pomeranian Region, Mieczysław Struk, Governor of the Pomeranian Region, and Gdańsk Vice-Mayor Alan Aleksandrowicz.

At the beginning, the Chairman of the Assembly, Prof. Krzysztof Wilde invited everyone to celebrate with a minute of silence Prof. Tadeusz Dmochowski, Dean of the Faculty of Social Sciences of the University of Gdańsk, who had died the night before. Then he read the letters sent for the occasion by the Minister of Education and Science, Przemysław Czarnek, and Deputy Minister of Health, Piotr Bromber. As emphasized by the Minister of Education, "close cooperation within the Fahrenheit Universities creates favourable conditions for the consolidated centres to compete with the best European and world universities. It also directly translates into the quality enhancement of Polish science and higher education".

– The activities undertaken so far as part of cooperation among the strongest universities in the region evoke my particular admiration. What I have in mind is, in particular, the projects implemented in cooperation with the Pomeranian Metropolitan Railway and the Gdańsk Economic Development Agency, as well as the successful debut at the largest technology conference in Central and Eastern Europe – Infoshare. I am convinced that the agreement signed today will open up new opportunities for Gdańsk universities and will become a solid foundation in the process of building a strong research centre – emphasized Minister Czarnek in his letter.

Piotr Bromber, Undersecretary of State in the Ministry of Health, expressed his deep support for the wide-ranging cooperation among the Fahrenheit Universities.

The Gdańsk Tech Rector, Prof. Krzysztof Wilde, introduced the audience to the goals and values of the established community, pointing to the most important ones.

– Our community draws on the academic traditions of Gdańsk, which go back to the times of the patron, Daniel Fahrenheit. We cultivate common values, such as: individual dignity, social equality, interpersonal solidarity, tolerance, equal treatment of diversity and social inclusion – explained Rector Wilde. – By promoting cooperation for freedom, including freedom of science, we want to act to improve the living conditions of present and future generations.

Then, the floor was taken by Prof. Adriana Zaleska-Medynska, Director of the Fahrenheit Universities, who briefly presented the main activities of 22 intercollegiate teams, established to develop consolidation scenarios. Among the most important initiatives mentioned by Prof. Zaleska-Medynska was a scholarship program funded by the Mayor of Gdańsk, Aleksandra Dulkiewicz, and cooperation with the Pomeranian Metropolitan Railway in terms of its expansion by a new line connecting Gdańsk inner city with the southern districts and the neighbouring communes of Pruszcz Gdański, Kolbudy and Żukowo. 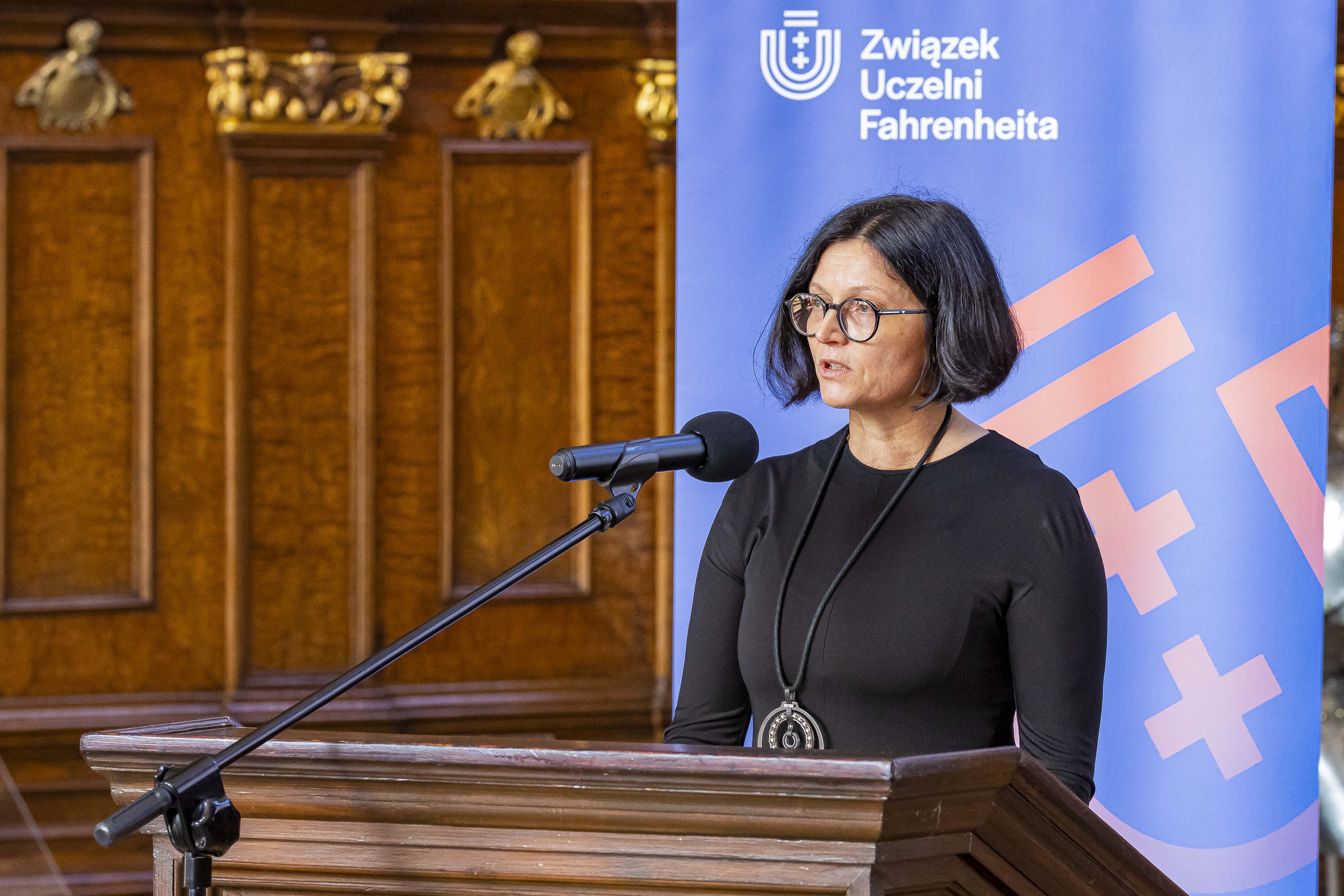 – The research infrastructure is a key element in scientific research. For this reason, in order to facilitate the use of this infrastructure by the teams of our three universities, we have made an inventory of the key research equipment. – An important undertaking in progress is the joint purchase of the library system, which will not only allow the introduction of a common library card, but also reduce the costs of purchasing this system. Work is underway to establish intercollegiate postgraduate studies. They are aimed at increasing the competencies, knowledge and skills of the students, which will serve to mitigate the impact of human activity on the formation of the so-called anthropogenic greenhouse effect and the adaptation of cities to climate change – enumerated Prof. Zaleska-Mendynska

The FarU Director also announced the upcoming events, including the May Fahrenheit Day celebration and the Science Picnic in Hevelianum, a joint integration weekend in September for first-year students combined with discovering Gdańsk, and finally – the joint opening ceremony of the next academic year with a march through the city.

At the end of the ceremony, the honorary guests – the Head of the Region, Governor of the Region and Vice-Mayor of Gdańsk – also addressed the community of the Fahrenheit Universities.

– This initiative is important not only for our region, for Gdańsk, but also for Poland. – We need development impulses, such as those given by the three largest Pomeranian universities. (...) We Poles, despite the differences, are able to unite around common causes. This is the case with the aid for war-torn Ukraine and its inhabitants. It is similar in the case of universities, in matters related to science, education and ideas (…) – said the Head of the Pomeranian Region, Dariusz Drelich. 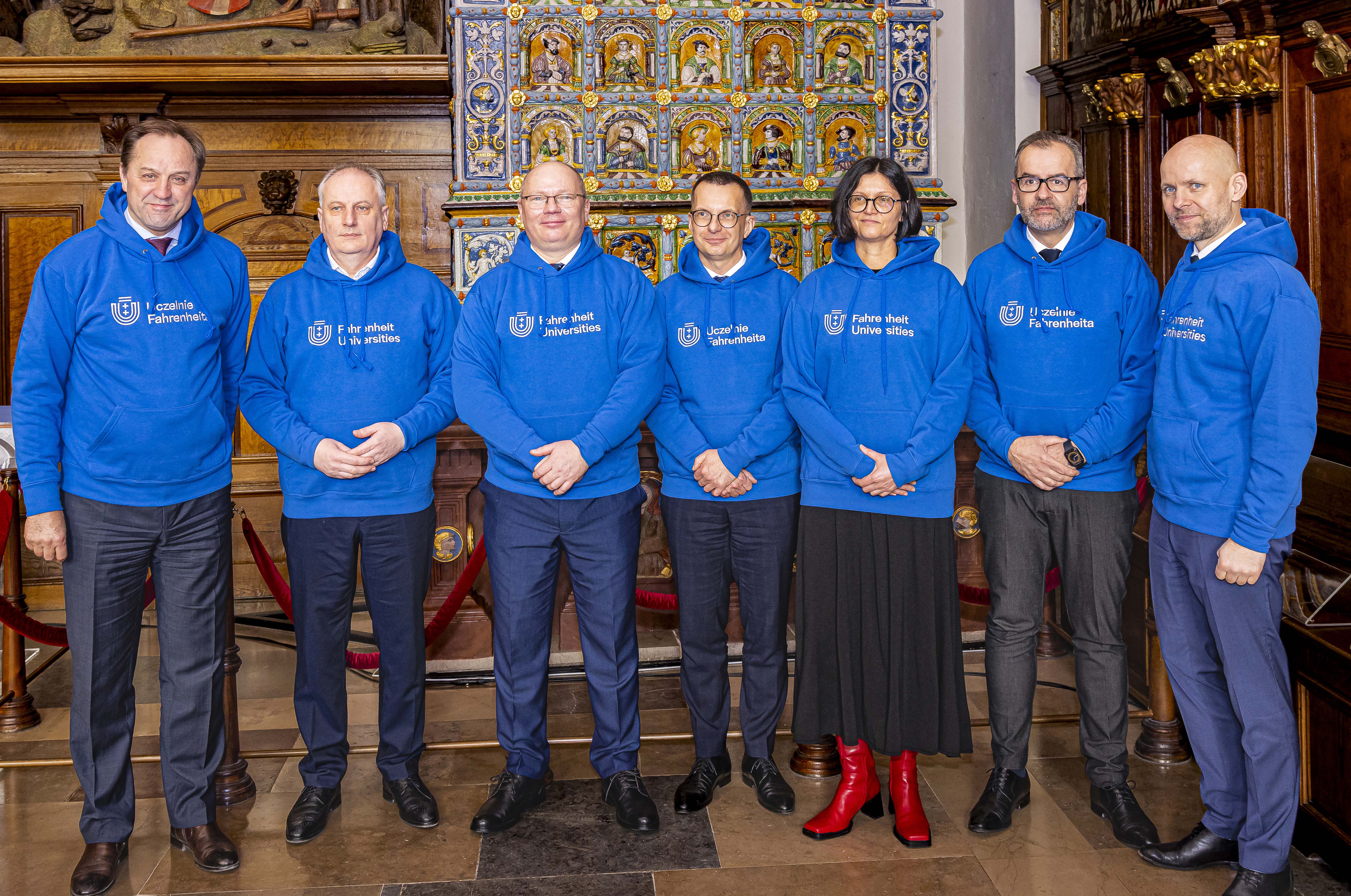 As the Governor of the Region added, the creation of a community is always a long-term process and it is never really completed.

– When we are talking about community, however, we primarily think about values. Today, in the face of the terrible war in Ukraine, the values​on which the Fahrenheit community is to be based take on a special importance. Freedom, truth, solidarity, tolerance, social inclusion and the affirmation of diversity. These are the values​that also bind our Pomeranian community and make it open to those in need – emphasized Governor Mieczysław Struk.

The Governor also thanked the universities and the entire Pomeranian academic community for the extensive support provided to thousands of refugees from Ukraine seeking shelter, and in particular to Ukrainian students.

– I have a feeling of deep satisfaction and pride that the Fahrenheit community, before it was formally constituted, had already passed the test of commitment to the values that are its foundation – concluded Governor Struk

The Mayor of Gdańsk, Aleksandra Dulkiewicz, was represented by Vice-Mayor Alan Aleksandrowicz.

– Strong universities mean a strong region and a strong city. – Today, when we have basically been dealing with a pandemic for two years, and now with the war in Ukraine, just across the eastern border, we need a community. A community in every dimension, and in particular the community of universities – said Vice-Mayor Aleksandrowicz. – First of all, I wish you every success on your way to build the federation of the Fahrenheit Universities. Not only these three universities, but also the next ones that will join the community.

Scholarship program for the best foreign doctoral students prepared jointly by Fahrenheit Universities and the City of Gdańsk.