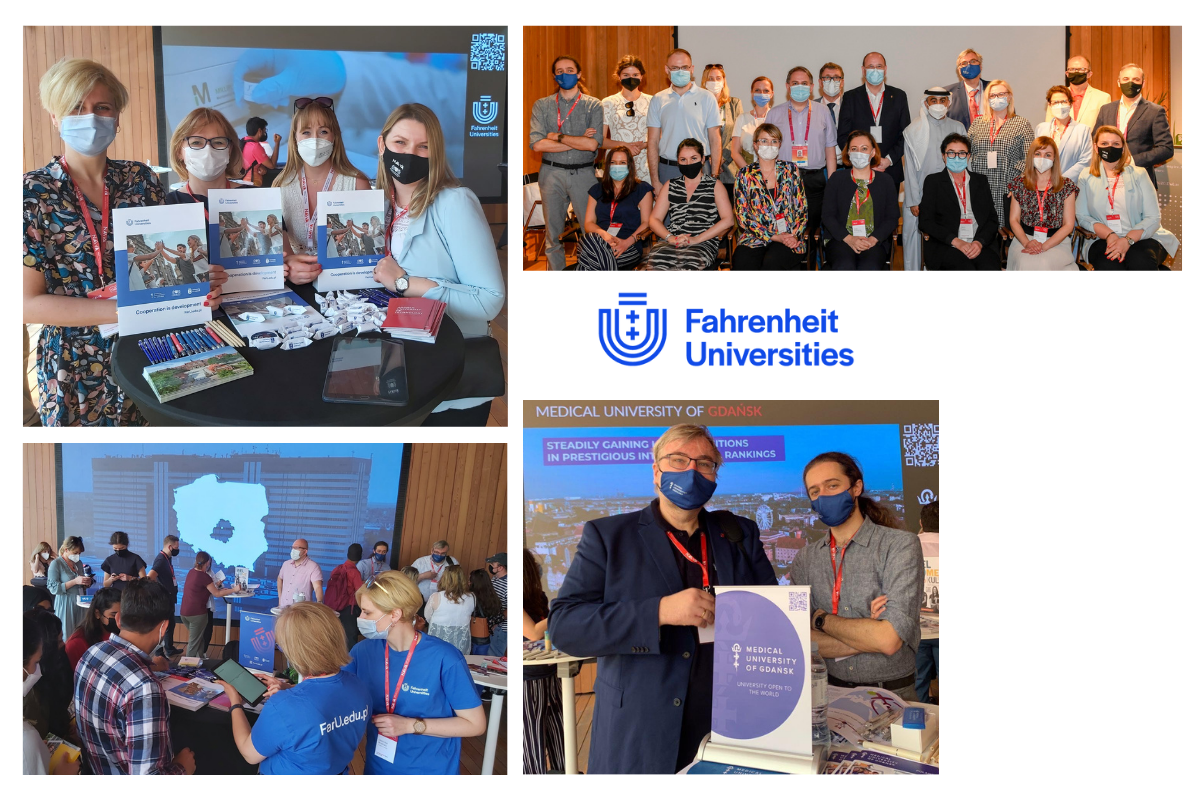 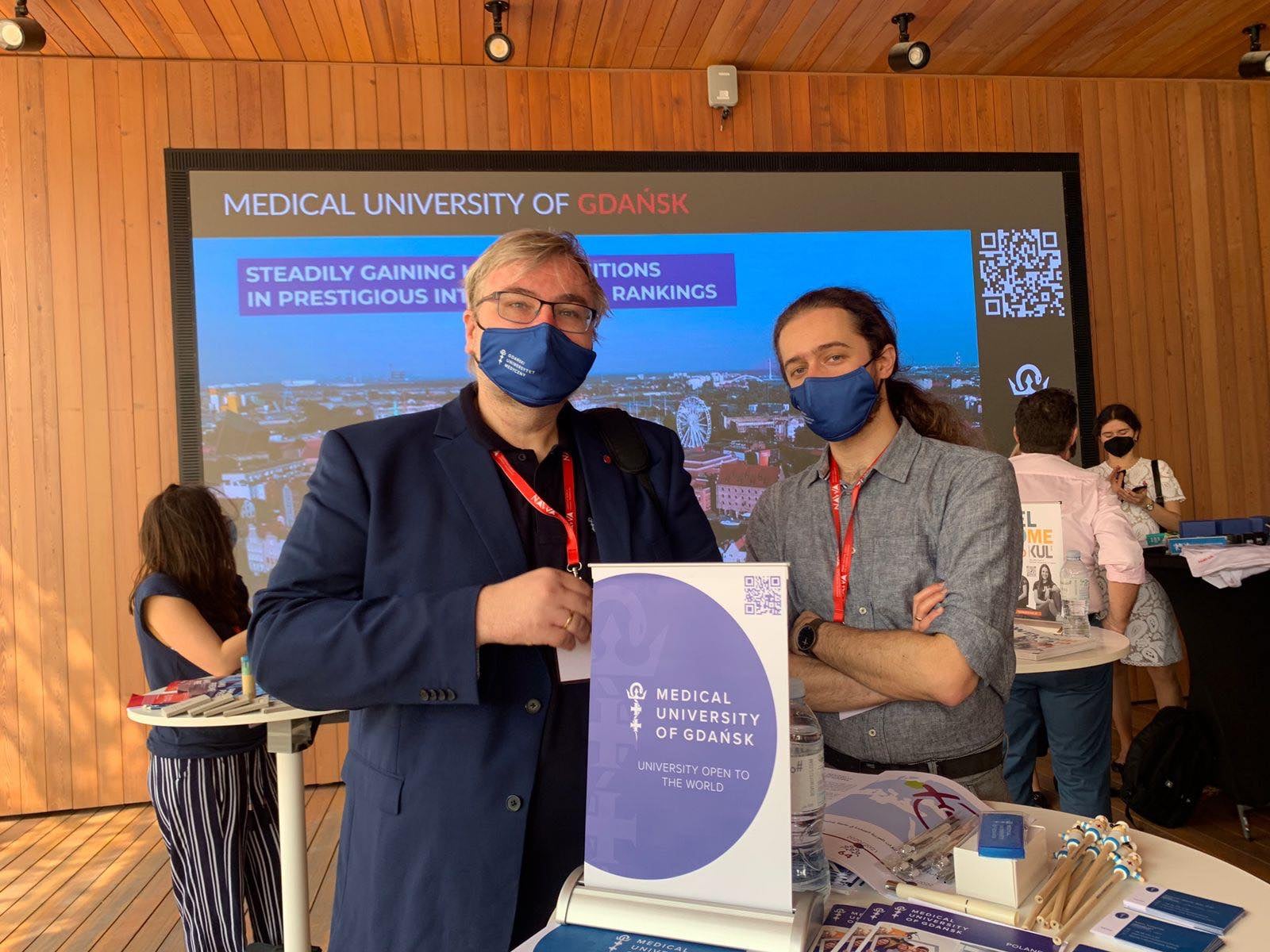 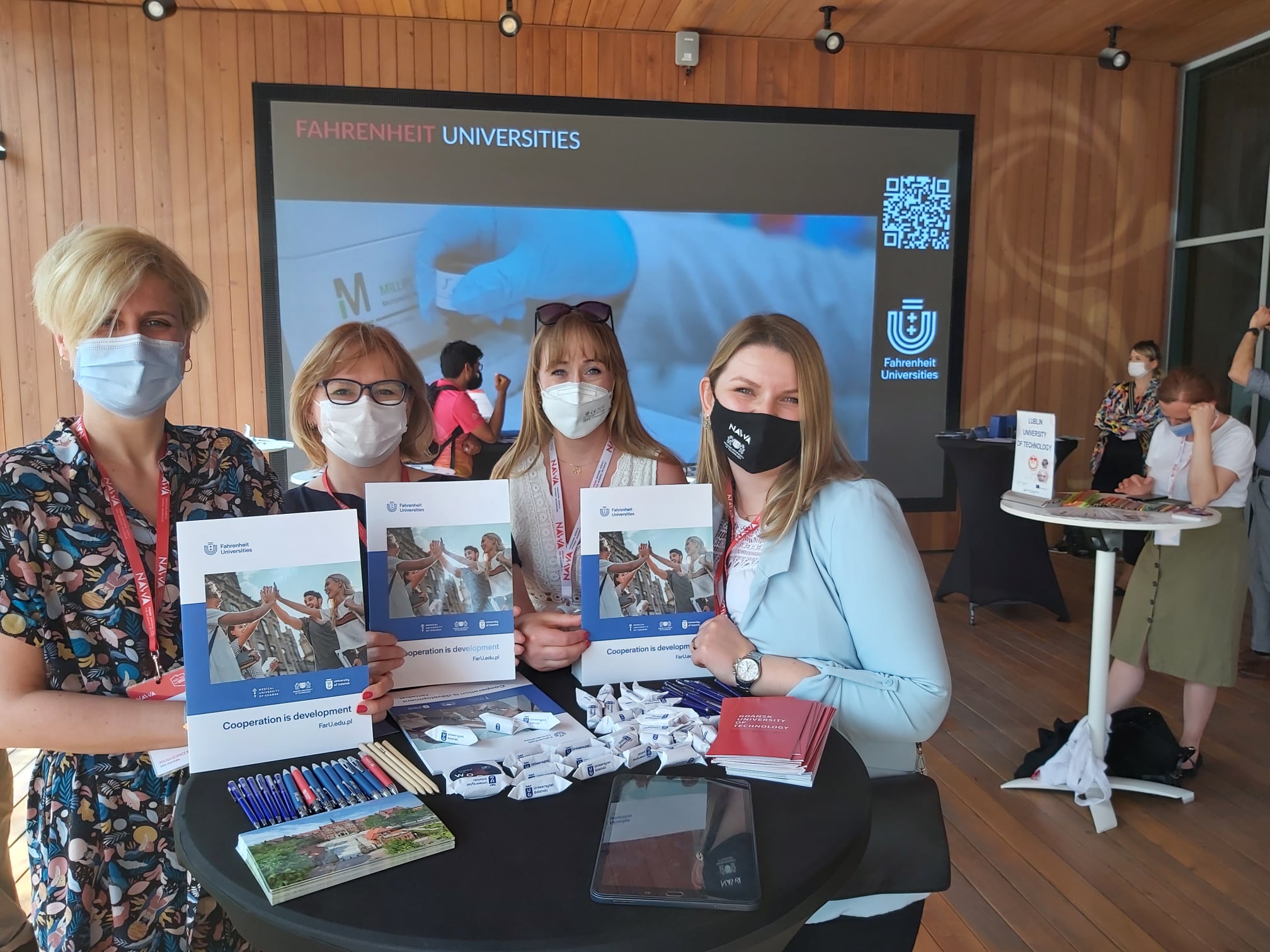 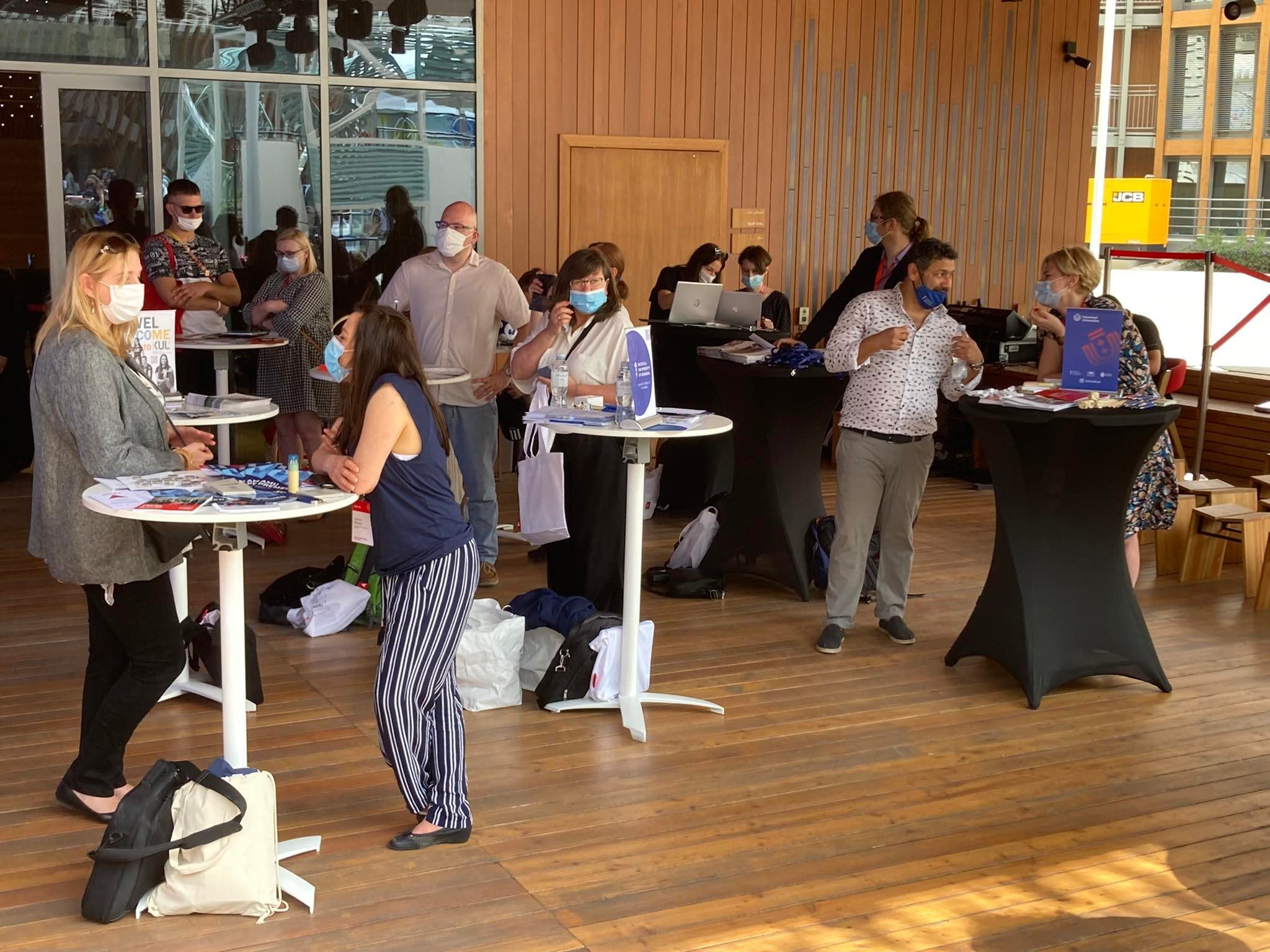 – The stand of the Medical University of Gdańsk arouses keen interest of the visitors. They mainly ask about medicine as a major, but also about general issues related to staying in Poland and specialisations, and eagerly listen to what is being said about the university. Many questions are also being asked about admission stages, tuition etc. We were successful in making several valuable contacts – said Dr. Habil. Sławomir Wójcik.

– Notwithstanding the pandemic and high temperature, visitors eagerly come to the stands prepared by Polish universities, talk and watch video footage. Our guests are immensely impressed by the Invasive and Non-Invasive Medicine Centre and the fact that we are a research university – added Adam Tuszyński.

– Our stay at the Polish Science Week in Dubai was one of the first opportunities to present ourselves abroad as the Fahrenheit Universities. The joint initiative of three thriving public universities of Gdańsk made a strong impression on the audience. In our presentations, we showed not only our educational offer, but also the region and the city of Gdańsk as we know that it is very important for young people faced with the choice of a course of study to know not only which subject to study, but also where – explained Monika Zdroik. 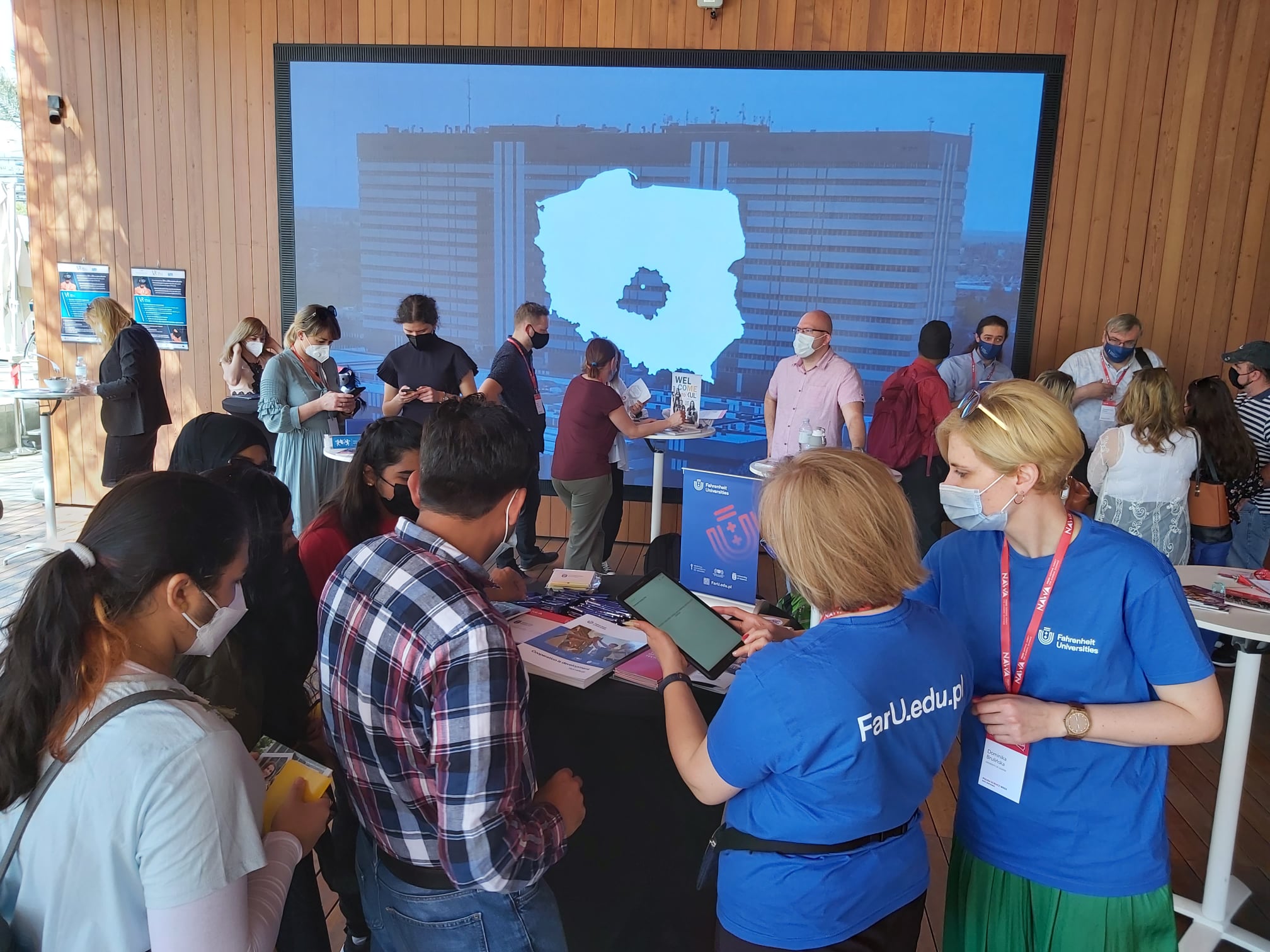 – Prospective candidates visiting the stand of the University of Gdańsk asked mainly about courses related to business, so we were able to present the offer of the Faculty of Economics and the Faculty of Management of the University of Gdańsk. Visitors from Poland, who also asked about the educational offer, were a great surprise. In addition, a meeting with the representatives of Sorbonne University Abu Dhabi offered a chance to start talks about the potential cooperation in academic exchange – emphasized Dominika Brulińska.

– The presence of the FarU in the Polish pavilion stand at Expo Dubai 2020 during the Polish Science Week is undoubtedly a big event for our universities. We had the opportunity to present our educational offer and the achievements of our scientists not only to prospective students, but also to world-class universities such as Sorbonne University Abu Dhabi and United Arab Emirates University (UAEU). During discussions with our university partners, it became clear that our curricula were similar in many areas. Therefore, there is potential for cooperation in the future – indicated Anna Modrzejewska.

The Polish pavilion in Dubai played host to the representatives of many Polish academic centres, including the three biggest universities in Pomerania. One of the main points of the event was the exhibition titled Poland the Heart of Europe showing the history and achievements of Polish medicine. The delegates of the FarU member universities presented their educational offers and planned initiatives orientated towards the greater internationalisation of those universities to 15,000 visitors from the world over. The aim of the activities which were undertaken was to present Gdańsk as a strong and student-friendly academic centre and to establish contacts, which will result in future cooperation both in the area of teaching and research. During the presentation of Gdańsk's universities, special attention was focused on medicine and technical sciences, which was in line with the trend seen at Polish exhibitions held this year. 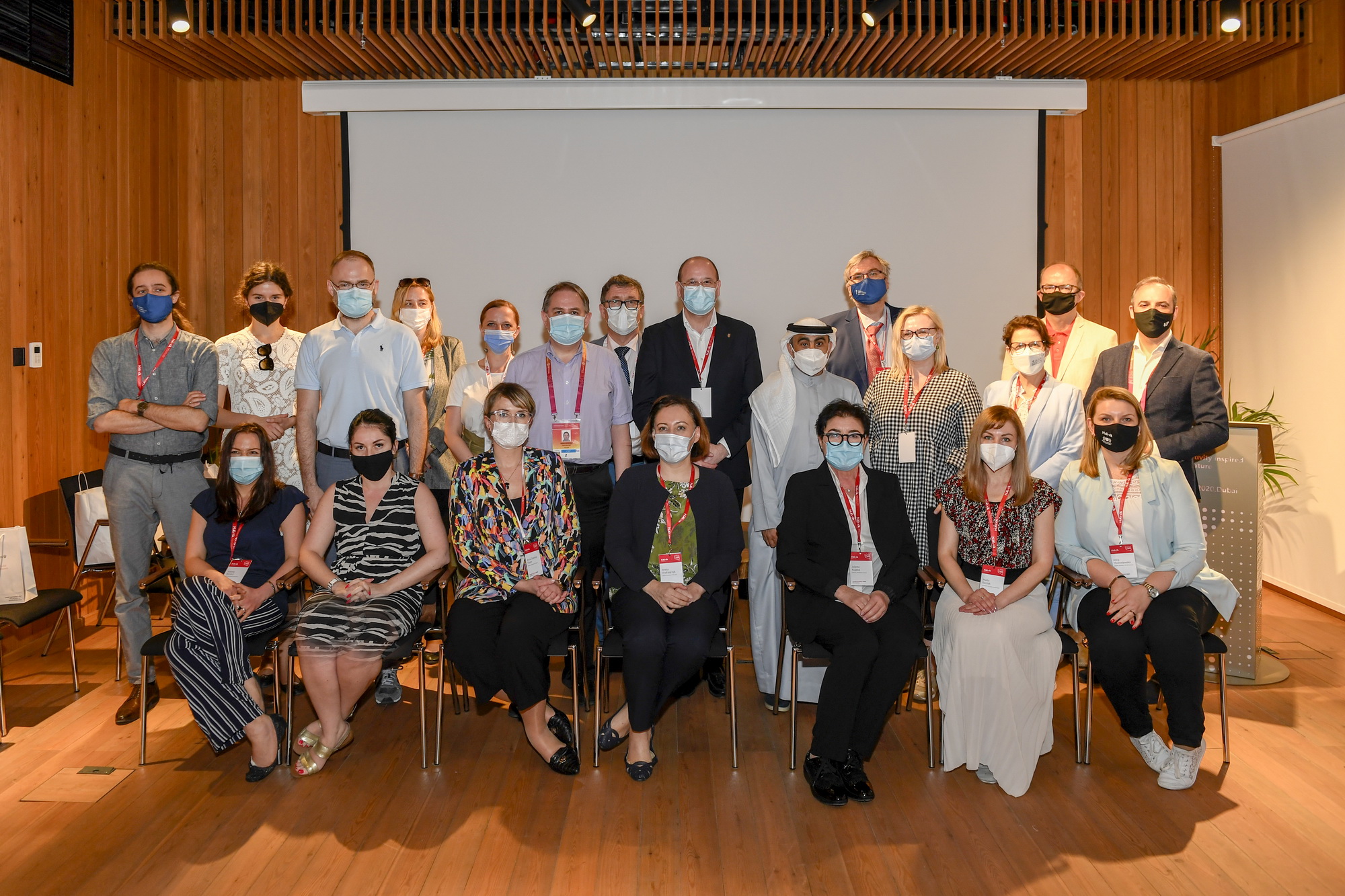 – We are very pleased with the presentation of topics related to science and its internationalisation during Expo 2020 in Dubai as this means that the potential of the Polish environment is appreciated. The choice of medical topics is not accidental. At a time of the pandemic, these topics are particularly relevant. This is also the time when young Arabs have taken greater interest in studying in Poland, especially in subjects such as medicine and technical sciences. And the crowds at events on the Polish Science Day indicate that this was a good choice – said Grażyna Żebrowska, Ph.D., Director of the Polish National Agency for Academic Exchange (NAWA).

The Polish Science Week at Expo 2020 is the initiative of the Polish National Agency for Academic Exchange, whose objective is the promotion of Polish scientists and research. The FarU representatives coordinated their actions with the Agency to build a positive image of Polish science, above all in Pomerania, in a coherent way. They took part in official talks with the representatives of, for example, the IS Dubai language school and the University of Paris (Sorbonne), during which the organisation of language courses for students and the start of academic cooperation were discussed. The main guest at the meeting on 21 February 2022 was Prof. Ahmed Murad, Professor & Associate Provost for Research of the United Arab Emirates University, who introduced his higher education institution and discussed its capacity and potential.

Fahrenheit University and its partners invite you to Fahrenheit Science Picnic and Gdańsk Juvenalia as a part of Fahrenheit Day celebration.

FarU scientists are working to obtain new compounds blocking the activity of enzymes which play a key role in the SARS-CoV-2 coronavirus replication process.

During the Polish Science Week at Expo 2020 in Dubai, delegates of the Fahrenheit Universities promoted the scientific and business potential and the educational offer of FarU member universities.