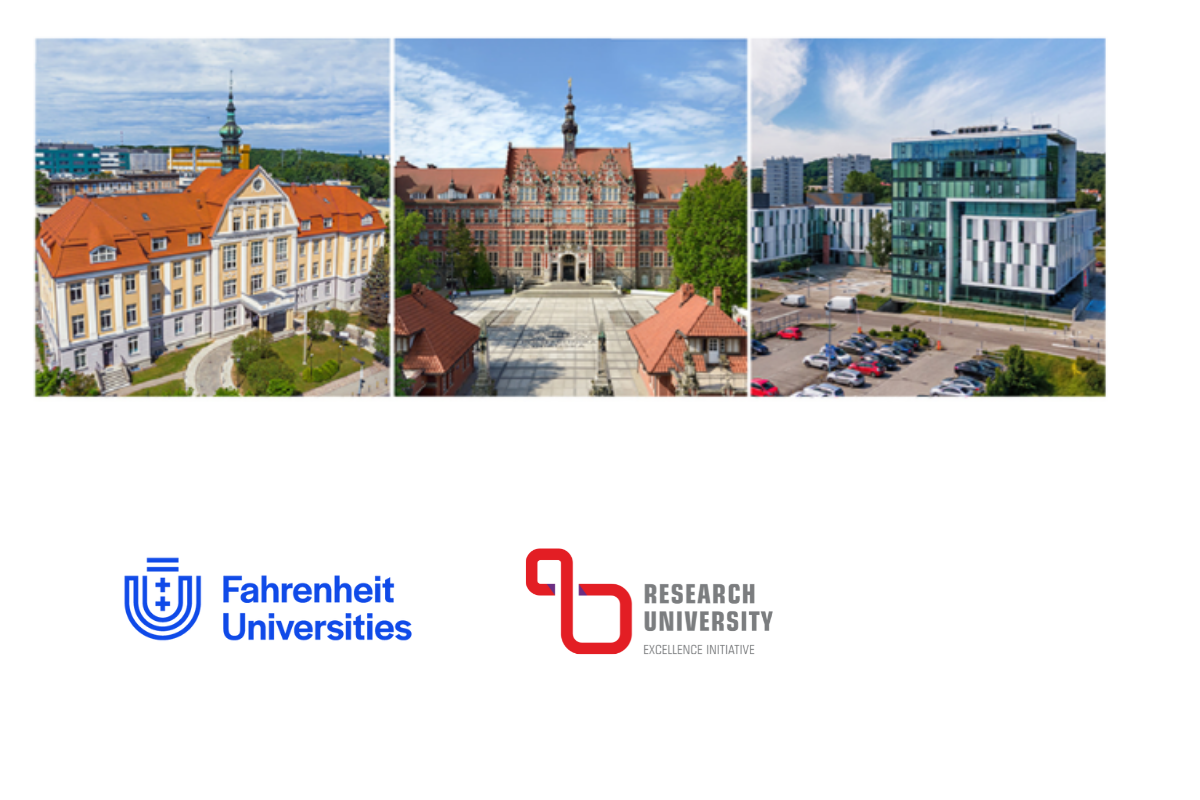 More than 20 experts of the three biggest Tri-City universities associated in the Fahrenheit Universities took part in the workshop on synergy areas in academic cooperation between the Medical University of Gdańsk, Gdańsk University of Technology and University of Gdańsk. The meeting was organised by the Team for Identifying Areas of Synergy in Research led by Prof. Tomasz Bączek, the Rector’s representative for the MUG’s “Excellence Initiative – Research University” Programme. Each university was represented by Vice Rector for Science,  Prof. Michał Markuszewski (MUG), Prof. Sławomir Milewski (Gdańsk Tech), Prof. Wiesław Laskowski  (UG), the representatives of Priority Research Areas within the Excellence Initiative – Research University, and by persons involved in cooperation between the universities. The event was also attended by Prof. Adriana Zaleska-Medynska, Director of the Fahrenheit Universities. The representatives had a chance to present their scientific achievements and the areas with synergy potential following from cooperation between the universities. The event was held on-site on 30 September 2021 in the “Eureka” Training and Rehabilitation Centre of the Gdańsk University of Technology in Sopot.

– Today’s workshop is devoted to an extremely important issue – the integration of partner universities and cooperation in research and development. Close cooperation between the key universities of Pomerania – the Medical University of Gdańsk, Gdańsk University of Technology and University of Gdańsk – will facilitate research and permit the creation of new development and implementation mechanisms in the areas which are of key importance for us – said Prof. Bączek. – We are facing a challenge which, in a further perspective, will bring organisational and financial benefits and enhance each university's prestige internationally. This is a very important step in the process of consolidation of the Fahrenheit Universities. 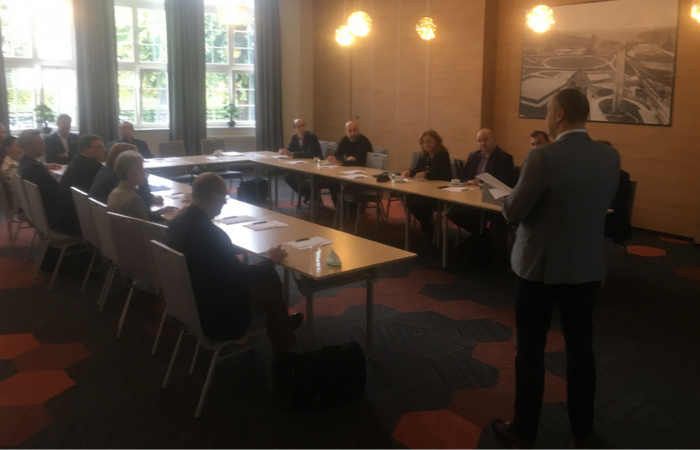 The event was moderated by Piotr Wróbel (a consultant at Consultants Ltd.), who presented a preliminary diagnosis conducted before the workshop and concerning the previous cooperation between the three universities.

Then the floor was taken by the research workers of the Gdańsk University of Technology, who, in their presentations, introduced research centres created owing to the “Excellence Initiative – Research University” programme. Rafał Piątek, Associate Professor, introduced the activity of the BioTechMed Centre, which is involved, for example, in research into modern technologies in biomedical engineering as well as in molecular and pharmaceutical biotechnology. He also noted the possible directions of cooperation with the experts of the Medical University of Gdańsk. Then Prof. Magdalena Gajewska presented the EkoTech Centre and cooperation options within the entity’s activity. The Digital Technologies Centre, which comprises 30 research teams ensuring the diversity of research, was introduced by the Centre's coordinator, Łukasz Kulas, Associate Professor. The last speaker to present cooperation opportunities was Prof. Piotr Jasiński. In his presentation, he pointed out to the Gdańsk Tech's strong point, which is diverse apparatus and a wide range of interests of the researchers who are members of the Materials of the Future Centre. The Centre comprises 6 out of 8 faculties of the Gdańsk Tech.

In the next part of the workshop, the experts of the University of Gdańsk had a chance to present their activity within Priority Research Areas. The experts also focussed on the common areas of cooperation with other universities. The first speaker was Michał Szymański, Associate Professor. In his speech, he presented research and development activity in biomedical and molecular research. He also emphasised current cooperation between the universities, including: 6 grants for the UG and MUG, 6 grants for the UG – PG – MUG and 3 grants for the Gdańsk Tech and UG. In his speech about quantum technology areas, Marcin Pawłowski, Associate Professor, stressed the international nature of research groups consisting of foreign experts in more than 50%. Then the floor was taken by Michał Harciarek, Associate Professor. As a successful example of cooperation, the professor mentioned cooperation with Prof. Alicja Dębska-Ślizień, Head of the Department of Nephrology, Transplantology and Internal Diseases of the MUG, in the area of psychology and sociology. As the last speaker, Prof. Hanna Mazur-Marzec shared her observations on environmental technologies including investigations into the sea and maritime issues.

The third university to present scientific fields with the synergy potential following from cooperation was the Medical University of Gdańsk represented by three leaders of the Priority Research Areas: Prof. Jacek Jassem (PRA 1 Oncology), Prof. Krzysztof Narkiewicz (PRA 2 Cardiology and Cardio-Vascular Medicine) and Prof. Ryszard Tomasz Smoleński  (PRA 3 Biochemistry, Genetics and Molecular Biology). Each of the leaders presented the structure of his PRA and described the activity of each team. Prof. Jassem also suggested that the next edition of the internal Young Creator of Science competition should be extended by an additional criterion, that of cooperation with the UG or Gdańsk Tech. Prof. Narkiewicz emphasised the importance, within the FarU’s activity, of support of the development of young researchers and of building their internal awareness of cooperation potential. Prof. Smoleński pointed out to the need to strengthen the network of persons involved in a given field, e.g. through workshop meetings within research teams. As the speakers emphasized in their presentations, the Medical University of Gdańsk is a modern academic centre with quickly developing interdisciplinary research. 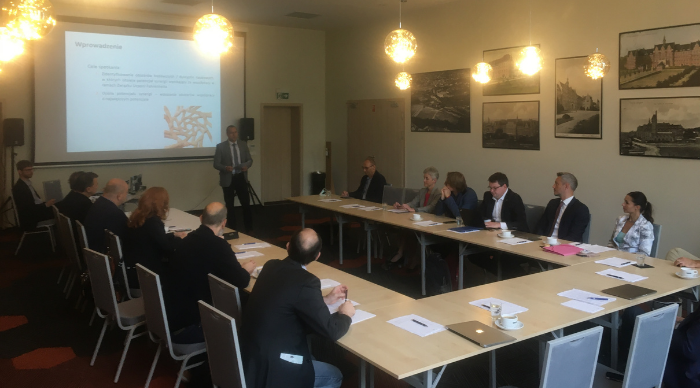 Prof. Adriana Zaleska-Medynska, Director of the FarU, pointed out to the importance of communication in the process of university merger and emphasised that academic cooperation was complementary, and not competitive. She also stressed the need for the joint involvement of the universities in the dissemination of outstanding activity of the experts.

The event was summarised in a discussion, during which the participants had a chance to share their experience and together attempted to consider the prospects for and directions of further actions which will possibly make academic cooperation between the universities more intensive. During the discussion, also other topics were mentioned, such as barriers to cooperation including communication issues within one university, the fear of change and merger, especially in relation to the loss of jobs, and the need for the initiative enabling contact with a greater number of researchers.

The representatives of the Ph.D. students’ self-governments signed a letter of intent on cooperation

CyberRadar is a contactless device enabling medics to safely monitor the patients’ respiration.

The FarU Post will officially start operating on 2 November 2021